With the following statements, word play and strong expression, the city of Lausanne (French speaking part of Switzerland and at the Lac of Geneva) launched at the beginning of March 2015: “Une ville jusqu’au bout des toits” and “au diable les toitures plates qui font grise mine dans le paysage urban!” the green roof policy initiative for the city. 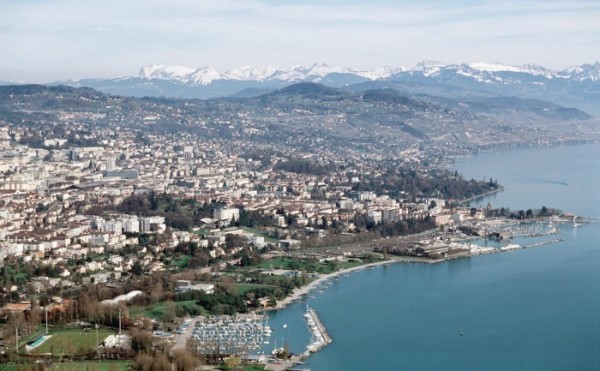 Lausanne – a Swiss city at the Lake of Geneva and close to the Alps (source: Google)

The City of Lausanne in the 1990s started to change the way it managed the green spaces in the city. Previously parks and and other green spaces were intensively managed but slowly the city has been taking a more extensive and natural approach.

With approximately 3,000 flat roofs, Lausanne has enormous potential to improve the city’s green infrastructure, by turning these their grey surfaces into green ones. This could create around 1 million m2 of green space for biodiversity.

Today, the City is taking strides to promote extensive green roofs on buildings owned by the City. It is also encouraging businesses and homeowners to also implement natural green space on the rooftops. The City has published a guide that provides recommendations and guidelines for architects and contractors to raise awareness and the implementation of green roofs beyond the City’s own ownership.

Where new developments are proposed, the city regularly makes the implementation of green roofs as a planning condition through urban planning regulations (PPA, PQ). This regulation covers the need to compensate for the loss of green and permeable spaces within the city.

A guide of recommendations to architects and contractors, and the launch of a subsidy program. In the case of new buildings, the city also already regularly imposes the green roofs in urban planning regulations (PPA, PQ) in ecological compensation guide to the loss of green spaces and permeable ground.

A Financial Boost for green roofs in Lausanne

To motivate private sector to vegetate their roofs during renovations or new construction, Lausanne has now launched a pilot project to financially support such initiatives. This follows the example of Basel. This northern Swiss City intiated two subsidy campaigns in the early noughties that gave confidence to both businesses, construction professionals and residents that green roofs were achieveable and desirable. This lead to over 250 new green roofs during the compaign and was huge boost for the city. Lausanne hopes to have the same effect and lead the way in the French part of Switzerland.

To qualify for the Lausanne grant, homeowners and businesses must meet a number of requirements.

The envrionmental quality factor of the green roofs, which covers:

Where PV panels and combined with green roofs the above environmental quality factors should be included.

This campaign along with the guidance and recommendations should lead to boom for nature and urban life quality for the city by Lake Geneva.

Some weeks ago my colleagues (from the University of Applied Sciences in Geneva and the City of Lausanne, Nature and City Department) and I organized a half-day event: an exchange of experiences on the Swiss green roof standards practice with the Swiss Society of Engineers and Architects (SIA) in Lausanne. END_OF_DOCUMENT_TOKEN_TO_BE_REPLACED

“Réinventer Paris”, or “Reinventing Paris”, the architectural program initiated by Anne Hildago (the Socialist mayor of the French capital) in autumn 2014 does not lack ambition. Though the diverse composition of Réinventer Paris’ contemporary urban planning teams should be the norm, in reality, it is a novelty. END_OF_DOCUMENT_TOKEN_TO_BE_REPLACED

The first Biosolar roof in Valais Switzerland is a private villa new built on the south side of Sion. The owners were completely open to a new ecological approach of greening a flat roof in combination with solar thermal panels. END_OF_DOCUMENT_TOKEN_TO_BE_REPLACED

We use cookies to ensure that we give you the best experience on our website. If you continue to use this site we will assume that you are happy with it.Ok